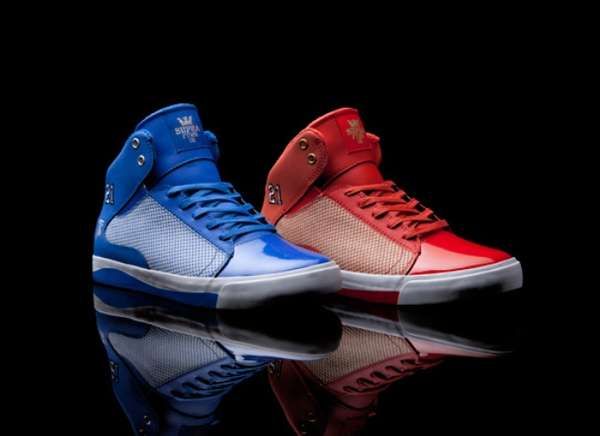 Michael Hines — August 8, 2011 — Fashion
References: suprafootwear & highsnobiety
Share on Facebook Share on Twitter Share on LinkedIn Share on Pinterest
SUPRA is celebrating the induction of Neion Deion into the NFL Hall of Fame with the release of the Deion Sanders Society Mid Pack. Sanders is known as one of the greatest two-sport athletes ever, playing professionally in both the NFL and MLB. Sanders' prolific career included winning a Super Bowl with both the San Francisco 49ers and the Dallas Cowboys and playing in the World Series for the Atlanta Braves.

The Deion Sanders Society Mid Pack comes in two colorways, red and blue, designed to represent the two teams that Sanders won the Super Bowl with. The shoes have several nods to Sanders, including his number embroidered into the ankle, his nickname of "Prime Time" stitched into the heel of the shoe, and the inner sole, which is actually a collage of Sanders' career highlights. The shoes are set to hit stores soon, with a portion of the proceeds going to benefit Sander's youth football charity.
3.2
Score
Popularity
Activity
Freshness
Get Better and Faster