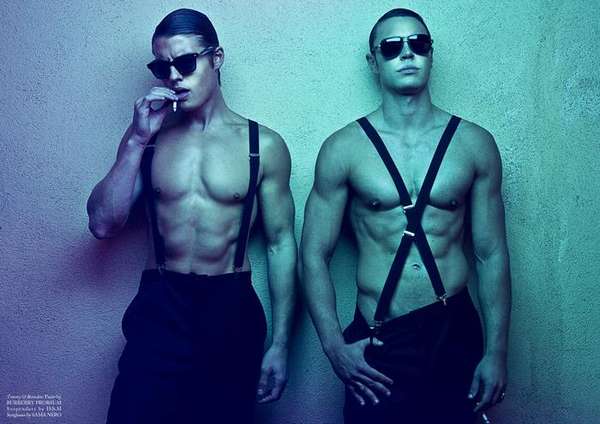 Andrew Loh — November 11, 2011 — Fashion
References: facticemagazine & ohlalamag
Share on Facebook Share on Twitter Share on LinkedIn Share on Pinterest
The Bang Bang shoot by photographer Vijat Mohindra for Factice Magazine #8 echoes action and drama. The title of the pictorial tells it all: glamorizing violence, the Bang Bang shoot, under the direction of Bradley McPeek, features a triplet of male models switching between the roles of assassins, bodyguards and escorts as they proudly show off their toned, well-built bodies.

Styled by Jeff Kim, model Sviatlana Sapeha shines in a purple Reiss dress and makeup by Colby Smith. The model finds herself in grave danger when the weapon-equipped trio in Ray Ban sunglasses and gelled, sleek hair approaches and threatens to harm her.

The Bang Bang shoot adds a twist by depicting betrayal among the colleagues, with one of the men under the hands of a pistol-carrying traitor. Finally, the Bang Bang shoot by Vijat Mohindra concludes with the unfortunate demise of one of the characters.
4.5
Score
Popularity
Activity
Freshness
Get Better and Faster