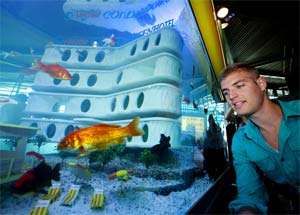 Elsa Blaine — July 5, 2009 — World
References: d-reizen.nl & nrc.nl
Share on Facebook Share on Twitter Share on LinkedIn Share on Pinterest
Amsterdam’s Schiphol airport is the new home of a hotel for goldfish. Travel agent D-reizen, with the help of Olympic swimming champion Maarten van der Weijden, has opened the Goudvissen Hotel so travelers have a safe place to leave their pet fish while they are on vacation.

A display aquarium has been set-up to look like a beach-front hotel complete with lounge chairs and 80 resident goldfish. However, the actual fish-sitting takes place in “private suites, so that they don’t get mixed up and catch each others’ diseases, D-reizen director Steven van Nieuwenhuizen explained.”

The fishy resort, inspired by the travel agent D-reizen, who uses an animated goldfish in its advertising, opened June 24, 2009.
5.1
Score
Popularity
Activity
Freshness
Get Better and Faster