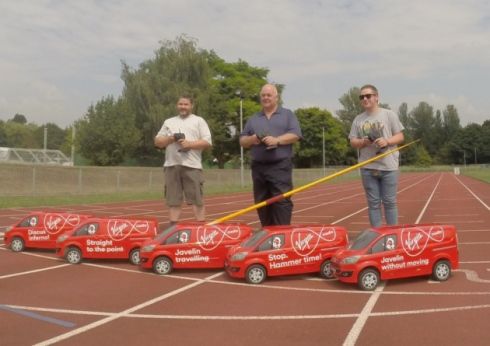 Rahul Kalvapalle — July 30, 2014 — Lifestyle
References: glasgow2014 & bexleytimes
Share on Facebook Share on Twitter Share on LinkedIn Share on Pinterest
A fleet of miniature remote-controlled vans are fast becoming one of the most important and fundamental pieces of Commonwealth Games equipment being used at the huge multi-sport event. The bright red-colored little vans are used to retrieve javelins, discuses and hammers flung by the athletes.

Usually, human volunteers hang around the field to retrieve equipment thrown by athletes. This is potentially dangerous however, as being accidentally struck by a javelin or discuss could result in serious injury or worse. This is where the four-wheeled, remote-controlled Commonwealth Games equipment comes in.

The vans were made in a 1/5 scale and are balanced to ensure that they can carry their own weight, approximately eight kilos. They are remote-controlled by 58-year-old Bob Hamilton, who developed the vans with his friend Andrew. They are strong enough to transport a javelin, discus or hammer from one end of the field to the other with ease, removing the need for a human to risk injury by standing in the field.
7
Score
Popularity
Activity
Freshness
View Innovation Webinars