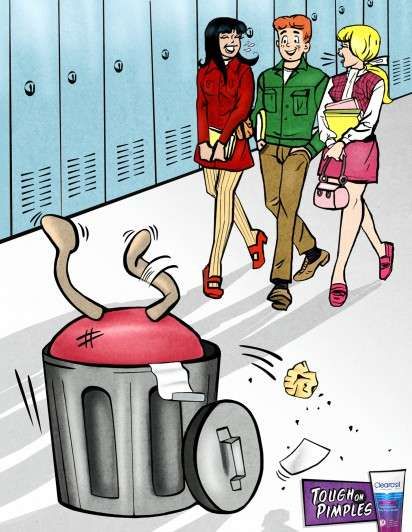 The Clearasil Tough on Pimples Campaign is Youthful and Nostalgic

Meghan Young — May 25, 2012 — Marketing
References: miamiadschool & ibelieveinadv
Share on Facebook Share on Twitter Share on LinkedIn Share on Pinterest
It looks like there is a new character in the Archie comic series, as shown in the Clearasil Tough on Pimples ad campaign. Granted, this character is more of a blemish on the franchise than anything else. It is a good thing the campaign is fun, nostalgic and youthful. It appeals to both teenagers and adults since the former will appreciate the context while the latter will be inspired to reminisce about their past. Although Clearasil targets the adolescent crowd, grownups suffer from zits as well.

The Clearasil Tough on Pimples ad campaign was conceived and executed by the Miami Ad School Europe, which is based in Berlin, Germany. An impressive campaign for students, it was art directed by Vanessa Krchova and Brian Cheung and faithfully illustrated by artist Jarett Fajardo.
4.5
Score
Popularity
Activity
Freshness
Attend Future Festival