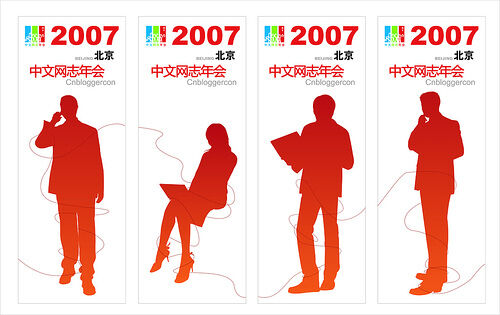 Roughly 20 per cent of bestselling books in China now stem from online literature. A press release from the Frankfurt Book Fair likens writing for the web to â€œthe karaoke bar of the 21st century.â€

What are the implications now that Chinese publishers have realized the power of, and freedom that accompanies, the Internet? What does it mean for the country's literary future? Will they embrace the movement, or fight for control and tradition?

Private publishing houses are bringing exposure to up and coming authors of the web and helping to shed more light on popular topics in the blogosphere. Last year about 20 per cent of best selling titles originated in cyberspace, and the Book Information Center (BIZ) in Beijing, along with Publishing Today magazine, predict this percentage will increase dramatically.

A study about the evolution of the e-book found a 40 per cent increase in regular online readers in China from 2006 to 2007. China has about 70 million blogs and 47 million active bloggers and up to 400 manuscripts are published daily in 64 online literature portals. 1,361 further website offer electronic reading material to China's 170 million web users.

It's a booming industry and China is embracing the Internet as fuel for the Chinese publishing industry.

Those experiencing the most profitability are private publishing houses, or what the Chinese call, â€œcultural companies.â€ Since can't publish anything that contradicts national publishing laws in print, on the web, they are flourishing.

Due to its open nature and viral capabilities, the web enables a creativity that offers much more freedom. The web is a safe venue for budding authors to be discovered, and a place where fresh topics can be introduced. Private publishers are even using the internet to hire online agents and talent scouts, occupational fields that didn't previously exist in China's highly censored publishing industry.

The creative impulses web 2.0 has generated are being acknowledged by around 570 publishing houses who are embracing that fresh talent discovered on the web, like blogger Hong Huang, are legitimate authors. A survey of China's top 26 publishing houses revealed 65 per cent consider the internet important for discovering new authors and topics, and that they spend at least 30 minutes a day perusing related sites.

As much as they have tried to prevent it, China's Internet is, for the most party, devoid of censorship. There is more freedom online than anywhere else in the Chinese media. The Great Firewall of China could never control 100 per cent of the content due to technological limits and the abundance of the content on the web.

Politics aside, the Internet has, like in other parts of the world, become an integral part of China's modern culture and mentality. The Internet offers a new platform for personal expression and self promotion. It's also the best vehicle to showcase a talent, hence the comparison to karaoke bars.

Unlike what's being feared in west, the Internet is actually becoming one of the most beneficial tools of the modern publishing industry in China, instead of becoming a threat to traditional print media.
2.1
Score
Popularity
Activity
Freshness
Attend Future Festival Virtual