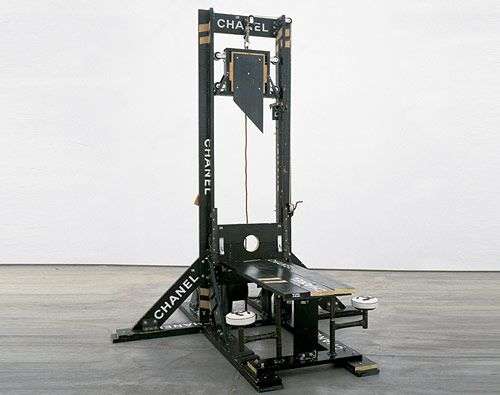 The Chanel Guillotine by Tom Sachs Beheads People in Style

Meghan Young — January 25, 2013 — Unique
References: tomsachs.org & neatorama
If anyone had to have their head chopped off like it was 1799, the Chanel Guillotine would be the way to go. Decapitating in designer style, modern society would probably make it legal thanks to the branding scrawled all over it. The allure of the Chanel name would put anyone in a trance, which seems more dangerous that this beheading machine.

Created by Tom Sachs, an artist born in New York City, the Chanel Guillotine (also strangely dubbed the Breakfast Nook) may invoke thoughts of the famed and wealthy being executed so ridiculously, but it does represent a more serious subject. The Chanel Guillotine could easily refer to the death sentence people's uncontrollable consumption is giving the world. A depressing thought.
3.1
Score
Popularity
Activity
Freshness