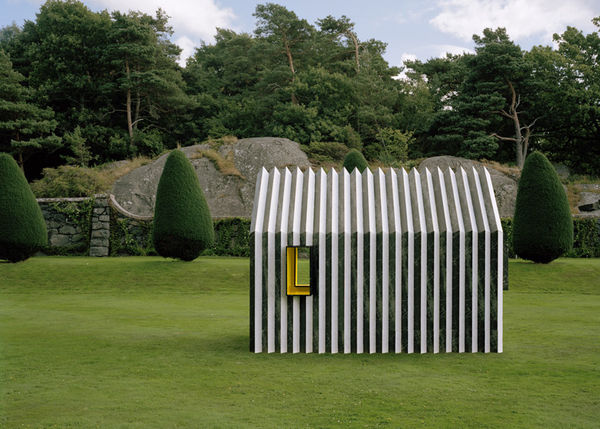 Amelia Roblin — December 13, 2013 — Art & Design
References: white.se & dezeen
Share on Facebook Share on Twitter Share on LinkedIn Share on Pinterest
Approach the Chameleon Cabin from one angle and you'll comprehend its cladding as pale. Walk up to it from the opposite side, however, and you'll be of the belief that it's actually dark. This charming little domicile is neither completely one nor the other, and taking it in much closer up will likely confuse you further.

Mattias Lind of Sweden's White Arkitekter worked with Happy F + B on this delightful dwelling. Its construction technique relies on the engineering of corrugated paper called MiniWell, which is just 2 millimeters thin. The accordion-style assembly of the lightweight modules features the texture of black marble on one side of every fold, and white veiny stone on every other side. Another part of the illusion of the Chameleon Cabin is that the surfaces are simply printed, just like the bright yolk yellow that coats the inside.
4.6
Score
Popularity
Activity
Freshness
Get the 2021 Trend Report FREE