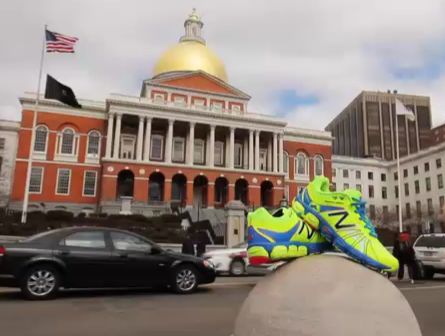 Megan Facciuolo — April 21, 2014 — Fashion
References: newbalance
Share on Facebook Share on Twitter Share on LinkedIn Share on Pinterest
Boston Marathon 2014 is taking place today and it’s going to be one of the most watched races to date. Last year, a tragedy struck the iconic road race, but this year people will continue to run not only to reach personal goals, but to portray how they refuse defeat. In homage to the “Boston Strong” campaign, New Balance has released this exclusive running shoe called the ‘Boston 890v4.’

The neon-colored shoe features REVlite and ABZORB cushioning, it is lighter than ever and comes in styles for both men and women. Boston is New Balance’s hometown, so it it fitting that it released a shoe in tribute to the town and its runners. The shoes are designed with an outline of Massachusetts, sport hearts on the back of the heels and have “#LoveBoston” printed on the insoles.

New Balance also created matching tees that raise money to help families affected by last year’s events. The company will donate $10 from its sales of each shirt to The One Fund Boston, Inc.