Cutting Houses in Half

In Japan: Retire, Get Divorced 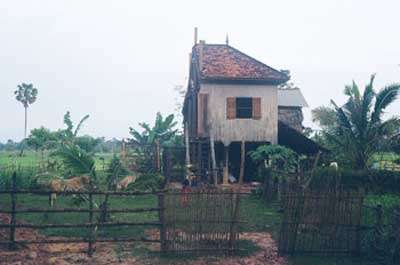 Pearl — October 10, 2008 — Lifestyle
References: arbroath.blogspot
Share on Facebook Share on Twitter Share on LinkedIn Share on Pinterest
A Cambodian couple married nearly 40 years, could not resolve their differences, so she has literally stayed put in her half of the house. The sawed-off other half was taken away by the husband to be reconstructed on the other side of the village. He is staying with his parents until he can rebuild his half of the house.

The wife complained of the husband’s malingering, while the husband faulted the wife for her lack of caring. So the physical separation of their home proved a cheap answer to expensive divorce proceedings.

You could say life imitates art, as the feuding Cambodian couple reminds one of the 1989 movie “The War of the Roses,” starring Michael Crawford, Kathleen Turner and Danny deVito as the lawyer. The marital spat just escalated to a bizarre conclusion.

That film, in turn, reminds history buffs of England’s real War of the Roses, when the Houses of York and Lancaster battled for the English Crown during medieval times.
2
Score
Popularity
Activity
Freshness
View Innovation Webinars