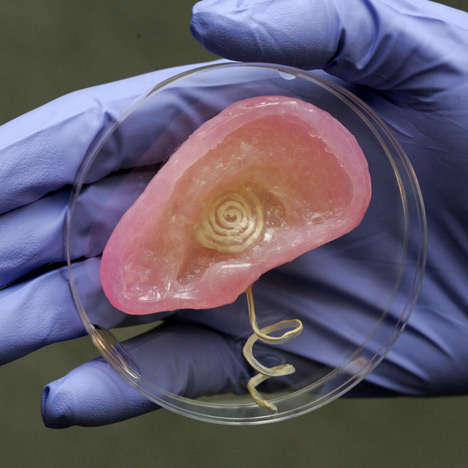 Scientists Have Created a Tool That Revolutionizes the Way We Listen

Brandon Bastaldo — May 6, 2013 — Lifestyle
References: dezeen
Share on Facebook Share on Twitter Share on LinkedIn Share on Pinterest
The possibility of having a high-tech, human-made body part attached to our bodies only started to become a startling reality a little while ago, and this newly developed design for these 3D-printed bionic ears shows that our imaginations truly have no bounds.

When many hear the term 'bionic,' images of the once ultra popular retro American television series 'The Six Million Dollar Man' come to mind. In this respect, the idea of having high-tech body parts capable of enhancing human performance is one that the public has regarded with skepticism and playful disbelief, until now.

News has broken that nanotechnology scientists at Princeton University have actually crafted the prototype for 3D-printed bionic ears. Capable of picking up radio frequencies far beyond any normal human's regular ears, these bionic body part creations may just be the first of many.
2
Score
Popularity
Activity
Freshness
Access Advisory Services