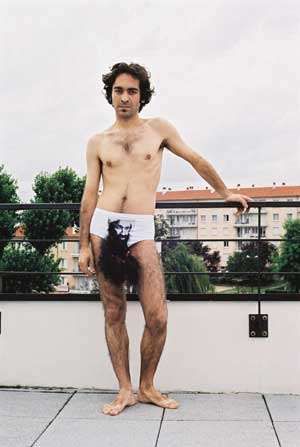 The briefs come with a face of Bin Laden, a long beard falling between the model's hairy thighs and the drawing of a bomb on the backside of the knitters. The briefs have a daring name: "Sex Bomb".

These briefs were orginally part of a fashion show dreamed up by artisite Ephinia. The show was about creating anti-machismo and anti male chauvinist pig underwear. Other briefs were created, such as one called "Family Jewels", " A Nest for a Small Bird" and "Elite Shooter".The video shows the fake models in their underwear.