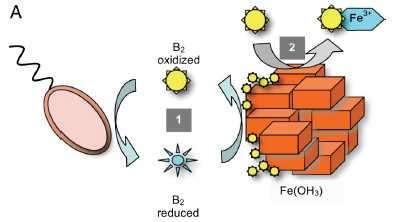 Vitamin B2 Found To Be The Key

IdeaMan — March 5, 2008 — Eco
References: pnas.org & www1.umn.edu
Share on Facebook Share on Twitter Share on LinkedIn Share on Pinterest
A type of bacteria commonly found in soil and water, shewanella, has been known for some time to be capable of generating electricity from simple materials like lactic acid. This capability enables them to access and dissolve metals, such as iron, as part of their diet. However, until now, no one knew exactly how they accomplished this feat.

Researchers at the University of Minnesota's BioTechnology Institute have discovered that the key chemical that enables this reaction is riboflavin, also known as vitamin B2. According to the news release, â€œThe interdisciplinary research team, which included several students, showed that bacteria growing on electrodes naturally produced riboflavin. Because riboflavin was able to carry electrons from the living cells to the electrodes, rates of electricity production increased by 370 percent as riboflavin accumulated.â€

This major biochemical advance, published in the March 3 issue of the Proceedings of the National Academy of Sciences, could lead to new sources of renewable energy, or could even be potentially reversed to help prevent metallic corrosion on ships.