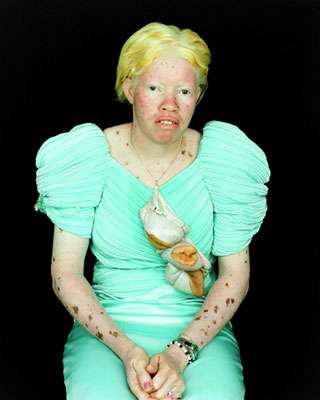 Sandra Winn — November 21, 2008 — Art & Design
References: rivingtonarms & new-art.blogspot
Share on Facebook Share on Twitter Share on LinkedIn Share on Pinterest
Pinar Yolacan’s ‘Maria’ series features women from the Bahia region in Brazil that was colonized by the Portugese. Almost every woman living in this region has “Maria” in her full name, so Yolacan definitely picked the appropriate name for her series.

Clothing and accessories were purchased from local merchants and some of the women are wearing testicles, placentas and organs from animals.

Yolacan’s use of a black backdrop truly captures the expressions and feelings of oppression in all of these women. According to a Riveting Arms, “The series is about colonialism and the damage it has done to cultural identity.”

Pinar Yolacan’s ‘Maria’ series reminds me of the picture of Indians along the Trail of Tears—they were forced to move away from their territory and were stripped of their cultural identity, an impact that is still felt among many American Indians today.
3.2
Score
Popularity
Activity
Freshness
Get Trend Hunter Dashboard