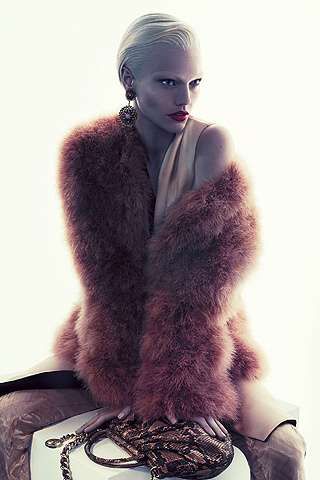 Souzan Michael — July 21, 2011 — Fashion
References: art8amby.wordpress & fashionologie
Share on Facebook Share on Twitter Share on LinkedIn Share on Pinterest
Mert Alas and Marcus Piggott are the geniuses behind photography duo Mert and Marcus and they are also behind the Giorgio Armani Fall 2011 campaign. The photographers have taken over for fashion photographer extraordinaire Nick Knight, who shot the Armani campaign last season, and have recently gotten behind the lens to shoot model Sasha Pivovarova.

Pivovarova is having a great season, as she has also fronted campaigns for the Juicy Couture Viva La Juicy fragrance, Paul & Joe and Hugo by Hugo Boss. The model is photographed wearing a glamorous bohemian fur coat in a pink-ish shade, giving it a touch of youthfulness, a blush-tone silk dress, while accessorizing with a snakeskin purse, bleached eyebrows and platinum, slicked-back hair.

The juxtaposition in the photograph between the softness of the texture and color of the clothing and the harshness of Pivovarova's hair, makeup and facial expression is characteristic of the fashion house's approach to feminine dressing. The Giorgio Armani Fall 2011 campaign is one to look forward to when flipping through magazines this fall.
3
Score
Popularity
Activity
Freshness
Get Trend Hunter Dashboard