Architecture of the Future 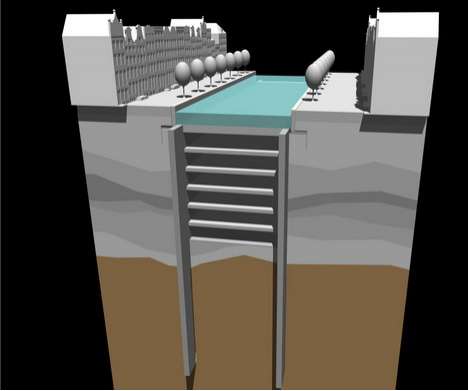 Under Water City Proposed for Amsterdam

lourdes sanchez bayas — February 24, 2008 — Eco
References: via http & treehugger
Share on Facebook Share on Twitter Share on LinkedIn Share on Pinterest
An underground city. It sounds like something out of The Matrix. But Architect MoshÃ© Zwarts says, "There has always been a lack of space in the city, so what we are doing is building a city under the city by using a new construction technique, which will not interfere with street traffic" he said. "By draining and then building under the canals" and then filling up the space with parking and other amenities such as shopping.

The engineer says it is not so futuristic and quite doable. â€œIt is both feasible and sustainable, creating a city beneath the city is not futuristic, it is a necessity in this day and age,â€ Moshe Zwarts says. He continues, "Amsterdam sits on a 30-metre layer of waterproof clay which will be used together with concrete and sand to make new walls. Once we have resealed the canal floor, we will be able to carry on working underneath while pouring water back into the canals. It's an easy technique and it doesn't create issues with drilling noises on the streets."

This conception has its detractors who question the wisdom of digging up underneath the city for parking and shopping and champion the notion of adding public transit and bike lanes instead. Still other critics of this "city of the future" conception are less welcoming and far less sanguine and enthusiastic.

Michael Hammond of World Architecture News says, "This scheme and its underlying drivers, fly in the face of every responsible principle of sustainability and current trends. The architects also claim that the proposal is CO2 neutral but when questioned by WAN (World Architecture News), Professor Zwarts acknowledged that his calculations omitted the carbon generated by construction, which in a mammoth scheme like like this would take many decades to recoup, if ever...That this project is technically achievable is not in doubt, but that does not justify its flawed concept."

Will underground cities ever become a feasible, ecologically and economically sustainable, environmentally-friendly reality? Will we see this architectural phenomenon in our lifetime? And the most important question which concerns all of humanity: How the heck will I get to the beach?
2.9
Score
Popularity
Activity
Freshness
Get Better and Faster