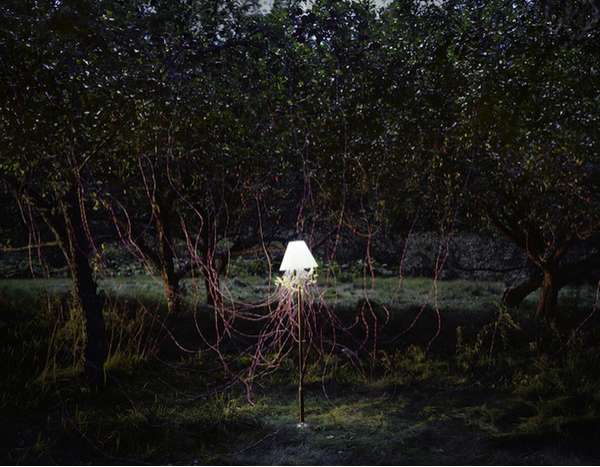 Meghan Young — January 1, 2012 — Eco
References: calebcharland & mymodernmet
Share on Facebook Share on Twitter Share on LinkedIn Share on Pinterest
The apple-powered LED lamp is like something straight out of a Frankenstein lab. The tentacles that burst forth from the light fixture and attach to the surrounding trees that surround it are rooted more in science, however, than fiction. Although created by a photographer, this unique light is actually powered by apples and not just made to look like it is.

Created by Caleb Charland, who is known for his fondness of experiments, the apple-powered LED lamp was constructed on a friend's orchard in Newburgh, Maine. Made up of 30 LED lights, this lamp took 300 apples to power it. According to Charland, he incidentally set up the apple-powered LED lamp near a deer pantry and "had to stand watch for the four hours of exposure, with noise makers and an AM radio to make sure the deer didn't inadvertantly go to get a snack and get tangled in the wires."
3.3
Score
Popularity
Activity
Freshness
Get Trend Hunter Dashboard

Color-Blocked Canyon Captures
The Photography by Peter Lik is Breathtaking