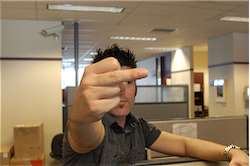 "Web 2.0 faces its backlash in the form of sites parodying Facebook and MySpace. Sometimes perusing MySpace makes us just want to lock ourselves in the basement and listen to Hungarian black metal," BuzzFeed clarified. "We suppose this is the internet equivalent to that."

Enemybook lets Facebook users categorize by "Enemybook" (see image) as well as view other people's Enemybooks. You can also "tell friends to 'enemy' someone, and spread the hate" or "Add Enemy Details" just as you would friends. For example, to answer "Why is John your enemy?," users can select from:
- We lived together and didn't get along
- We worked together and didn't get along
- John hooked up with my (ex/sister/etc.)
- John killed my (...)
- John insulted my (...)
- John is my (ex, etc.)
- John i the friend of my enemy
- Facebook ruined our relationship
- We became enemies randomly
- I don't even know this enemy, but I hate them already

Feature like these could bruise a few feelings... but I guess that's the intention behind the aptly named site.

Snubster, on the other hand, "encourages people to undermine and mock online social communities, got its start in 2006 and allows users to alienate each other by putting people 'On Notice' or listing them as 'Dead to Me,' Wired blog explained. "While Snubster actually has its own site, it also recently launched Facebook application."

107 Ways to Waste Time at Work