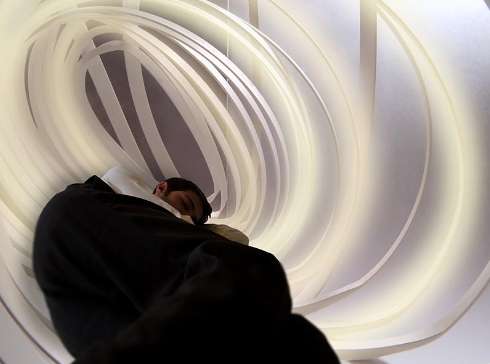 Ayman — March 3, 2008 — Unique
References: moma.org & curatedobject.us
Share on Facebook Share on Twitter Share on LinkedIn Share on Pinterest
The well-being and productivity of workers is essential for the success of any enterprise. Analeptic is a project by French designer Marie-Virginie Berbet that aims to guarantee optimal physiological conditions at the workplace. She has developed two devices for the project.

The first, Narco, is a cell for napping. The interior of the cocoon consists of a series of strips that provide visual and sound insulation from the surroundings. Also the hammock-like position suggests levitation. The cell detects the exact moment the user falls asleep, and ten minutes laterâ€”enough time to be restorative but before deep sleep sets inâ€”the cocoon's strips begin emitting a soft yet stimulating light. Perfect for a short productive nap.

Cyclo, the second part of Berbet's Analeptic project, is a desk blotter with behavioral and physiological sensors and a rotating light with interdependent strips that switch on and off in sequence. The intensity of the light and the speed of the switching and rotation vary according to the user's stimulation and activity levels. At normal levels the light turns slowly. When the user is hyperactive, the light turns fast and then progressively slows, inducing the user to relax and chill. Conversely, If the user is sleepy or fatigued, the light stops turning. Its intensity rises in the front strips to provide a screen of blue light that blocks melatonin secretion and enhances the arousal level.
2.1
Score
Popularity
Activity
Freshness
Jeremy Gutsche Keynote Speaker