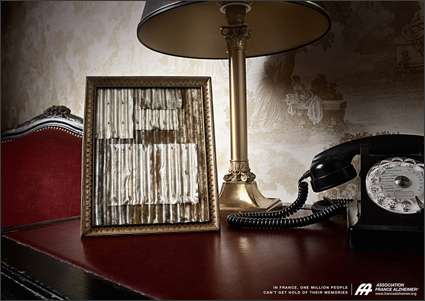 Geebee Micro — May 19, 2009 — Lifestyle
References: adsoftheworld
Share on Facebook Share on Twitter Share on LinkedIn Share on Pinterest
I think the ad campaign by Saatchi & Saatchi in conjunction with the French Alzheimer’s Association is one of the best group of images I’ve ever seen to help people understand what loved ones are up against, as well as themselves, in facing the future with the disease.

Working with the tagline, “In France, 1 million people can’t get hold of their memories,” the entirety of the photos are consciously designed to help us see the process and end results Alzheimer's brings to the individual victims and friends.

For example, the background is portrayed as a mixture of dark and light, with the center of each photo including a picture frame that is boarded up, an obvious reference to the mind of the individual stricken by Alzheimer's.

Also what the boarded picture frames seem to be saying is there was once someone there in the photo that can no longer be found, even though the frame holding the memories (or lack of them) still remains. That seems to be saying something to those that have to care for the long process of loss Alzheimer's brings.

There’s a lot more to it, but I think it’s a fantastic tool to help people see and understand what is being faced by victims and their families and friends, and a potentially great tool to help raise money for Alzheimer's.
3.5
Score
Popularity
Activity
Freshness
Get Better and Faster