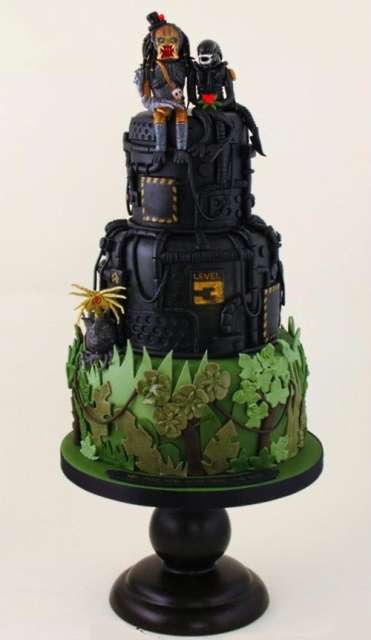 The Alien and Predator Cake Brings the Two Movie Monsters Together

Michael Hines — June 13, 2012 — Lifestyle
References: littlecherrycakecompany & whengeekswed
Share on Facebook Share on Twitter Share on LinkedIn Share on Pinterest
The bar has been raised for sci-fi wedding cakes by the Little Cherry Cake Company and their Alien and Predator cake. The Rosendale, United Kingdom, cake shop created this geeky and horrifying cake, successfully mixing the two films together to create a dessert that is strangely romantic.

The Alien and Predator cake has three tiers. The bottom tier is strictly predator, and is inspired by the jungle. The top two tiers are more sci-fi in origin, and are inspired by the 'Alien' films. The cake toppers are, of course, an alien and a predator. Alien is playing the bride, and a predator is playing the groom. The cake itself is great from a geek's point of view, and it shows just how much passion and creativity are involved in creating great cakes.
4
Score
Popularity
Activity
Freshness
Get the 2021 Trend Report FREE