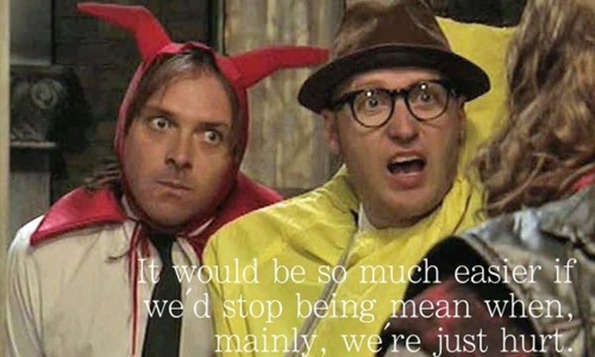 Meghan Young — January 18, 2013 — Pop Culture
References: alaindebottom.tumblr & itsnicethat
Share on Facebook Share on Twitter Share on LinkedIn Share on Pinterest
There seems to be a Tumblr for everything, including mashups of old sitcoms and contemporary philosophers, as is the case with the Alain de Bottom photo blog. Alain de Botton's words of wisdom have been overlaid onto images from the 1990s slapstick TV show 'Bottom,' hence the clever play on words. The site sums it up well enough, "The Aphorisms of Alain de Botton. The pictures of Rik and Ade."

Created by comedian John Luke Roberts, the Alain de Bottom Tumblr illustrates these philosophical musing in very funny and effective ways. For instance, the distressed looks on the actors faces perfectly capture the Alain de Botton's observation, "Paranoia: the freewheeling echo of all the bad stuff one has done, coming back for revenge," while another shows the Rik and Ade gazing lovingly into each others faces to illustrate, "Cheering abstract thought: the millions around the world who will, this very night, happily sleep together for the first time."
1.1
Score
Popularity
Activity
Freshness
View Innovation Webinars