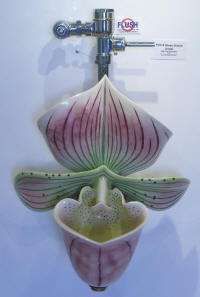 Art Appreciation in the Men's Room

Djemal — December 1, 2006 — Art & Design
References: clarkmade
Share on Facebook Share on Twitter Share on LinkedIn Share on Pinterest
There are not many things in our modern society that a man can honestly claim to be for 'men only'. But for what it's worth, urinals are one of them; up to now this toilet fixture has been boringly functional and an atypically ugly.

That was until Clark Sorensen who grew up in Salt Lake City decided to make every visit to the men's room an art appreciation one. He has been creating art for over 5 years and has rightfully received worldwide acclaim and attention for his unique series of urinals. These 'works of art' are truly unique and so beautiful they almost make you forget the reason you're stood in front of the them.

"Many have asked where the idea for these pieces came from. Well, quite obviously from the bathroom! I had the idea while standing over a urinal many times a day and letting the shape inspire me. I saw a shoe, a mouth, a shovel, a cup, etc. The flower became the shape I finally chose partly because I love flowers and partly because it is the perfect contradiction - taking a mundane, even ugly object and transforming it into something different, even something beautiful."

Each fully functional urinal is hand built from fine porcelain and the whole process can take up to eight months to complete. Clark has even had to perfect his own glaze recipe and techniques (which he keeps to himself) to obtain the high quality fantastic colors. The urinals can be installed in any bathroom in the world for a price. The price for an original work of art urinal - well that will set you back anywhere between $6500 and $11,000.

43 Bizarre Toilets and Urinals
A Tribute to Joe the Plumber