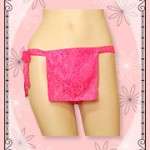 Underwear Tarzan Would be Envious Of Is Hot In Japan

These undies are a modern take on the traditional white loincloths worn by Japanese men in the old days known as “fundoshi.” However, the new styles are decidedly more feminine and available in a myriad of colors and patterns.

“Cool,” “easy” and “comfortable” are words used by retailers to describe the undies, which are elastic-free. They consist of a long, rectangular cloth with tie straps at one end. After the straps are secured around the waist, the cloth is pulled from the rear to the front, then wrapped around the front straps and draped down.

Pioneering the trend is Une Nano Cool, the Japanese subsidiary of lingerie company Wacoal, which is marketing the loincloths under the name “Nanafun” along with matching bras. Numerous online Japanese retailers, such as the Love Supplement, are also selling lines of pendre shorts. Several retailers claim that sales have increased ten- and twenty-fold during the past year.

Will the trend catch on with women in other countries? It may be too early to say, but Tarzan would surely be in his glory.