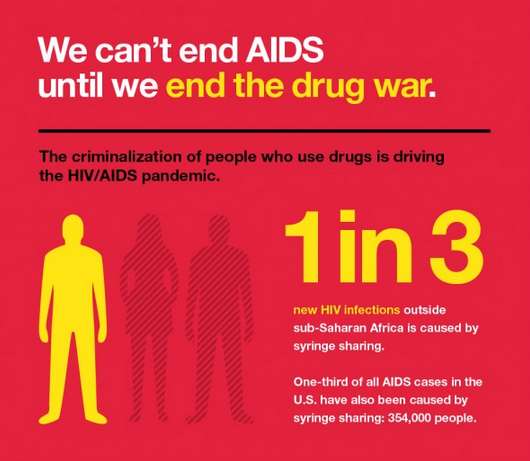 Jennifer Gosnell — July 30, 2012 — Social Good
References: visual.ly
Share on Facebook Share on Twitter Share on LinkedIn Share on Pinterest
The 'We Can't End AIDS Until We End the Drug War' infographic speaks volumes about the current condition of the world today. With an ongoing battle against AIDS, drugs and many other prevalent issues, the world can be a scary place.

One in three people who get infected with HIV outside of Sub-Saharan Africa can root the cause back to sharing a syringe. Places that have sterile syringe access programs have greatly reduced rates of HIV and AIDS infection. While this may seem like backwards thinking -- shouldn't we be eliminating drug use altogether? -- the fact remains that for the current condition of the world, this is the most feasible option. Not only does it lower the rates of AIDS, but it also lowers the cost alongside. The program costs approximately $500 per person per year, whereas treatment for AIDS for a year is over $34,000.

Further, as was experienced in Seattle, those with access to this type of program were also five times more likely to check themselves voluntarily into a drug treatment program for a long-term solution.
2.4
Score
Popularity
Activity
Freshness
Get Trend Hunter Dashboard

Altruistic Aromatic Decor
Chilanthropy Candles are Both Relaxing and Philanthropic