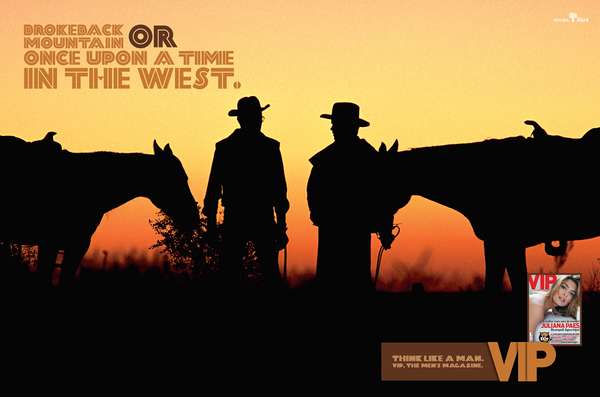 Are These VIP Magazine Ads Homophobic?

mediterranean — June 13, 2008 — Marketing
References: adsoftheworld
Share on Facebook Share on Twitter Share on LinkedIn Share on Pinterest
Let’s get this straight. If you think “Brokeback Mountain” instead of “Once upon a time in the west” when you see two cowboys sharing a moment at sunset, you are not a real man.  Well, that is what this new campaign from VIP, the “Men’s Magazine” claims, asking you to “Think Like a Man”.

While I totally disagree with the concept (I mean c’mon, gay men are not real men?), I couldn’t stop laughing at the “It’s raining men” or “Born to be wild” ad. The third ad shows a policeman with his hands on his hips with the caption, “Village People” or “The Police”.

The April 2008 campaign was created by MatosGrey ad agency in São Paulo, Brazil, with creative directors Silvio Matos and Leandro Castilho, art directors Ricardo Sarno, and Lucas Heck, and copywriters (who we have to credit for the captions) Filipe Medici and Fernando Silva.

At least this campaign did not go as far as Hanes did: