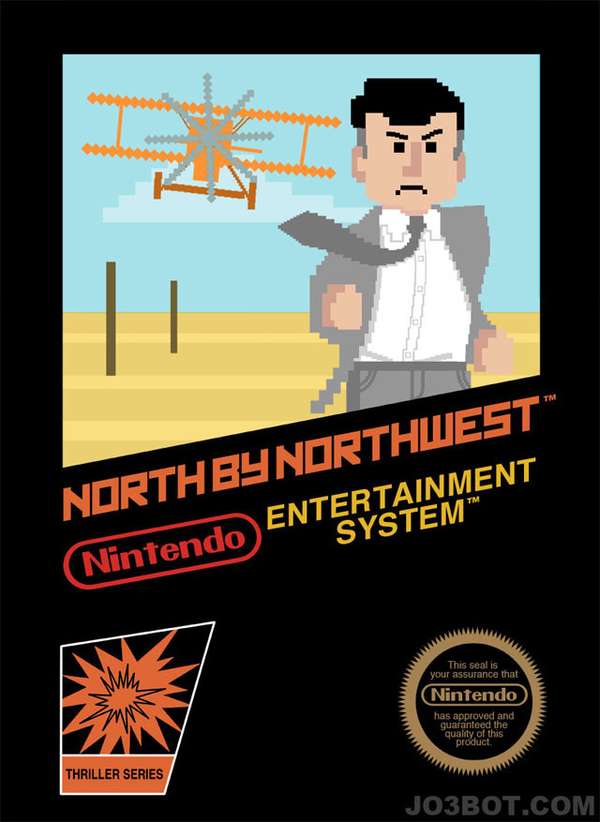 Josh Triantafilou — April 7, 2012 — Pop Culture
References: jspiotto.blogspot & juxtapoz
Share on Facebook Share on Twitter Share on LinkedIn Share on Pinterest
Vintage video games have an aesthetic that has grown in popularity since their heyday rather than become passe, but ionically, the look of these old-school media by Joey Spiotto can be as much attributed to the constraints of technology at the time of their production as to intentions of their designers.

These days artists and designers are deliberately rendering their work in 8-bit. Spiotto is one such artist, however, he goes more retro than msost. He recently created three faux 80s Nintendo cartridge covers inspired by Alfred Hitchcock films. These films are: the bone-chilling, 'Psycho,' the classic, 'North by Northwest,' and of course, 'The Birds.'

The characters, objects and scenes depicted in each design aptly correspond to their respective movies. For instance, the 'North by Northwest' cover art depicts a man running from a biplane in a field. In 8-bit, the scene is less dire than it is humorous -- this point applies well to all of illustrations.
5.5
Score
Popularity
Activity
Freshness
View Innovation Webinars