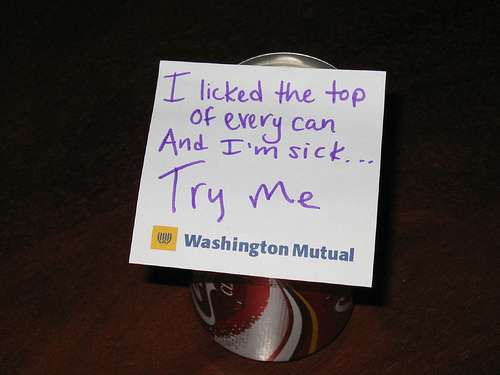 Pearl — July 29, 2008 — Pop Culture
References: passiveaggressivenotes & reubenmiller.typepad
Share on Facebook Share on Twitter Share on LinkedIn Share on Pinterest
Ever wanted to leave a note for the lout who stole your lunch? Then you will appreciate this hilarious website where people submit the kinds of notes they've come across that you wish you wrote. Passive Aggressive Notes.com features "painfully polite and hilariously hostile writings from shared spaces the world over."

The notes, big and small, cover all sorts of situations, but the most common is stolen lunches and the filthy bathroom habits of roommates. These are anguished cries of frustration tinged with barbed humor and sometimes a dose of revenge thrown in. Some of the best from the site are shown here.

Many of the submissions are accompanied by a little story like the â€œundercoverâ€ operation required to copy the note left by the mother-to-be whose lunch was stolen. The woman who licked her pop cans actually did and WAS sick. She said the ploy worked except on her Dad. Then there are the notes which betray the quirkiness of the writer like the lady who admonished men for using the women's washroom and talked about a potluck on the same note!

A book by Kerry Milley, the creator of Passive Aggressive Notes.com will be out this fall.
3.2
Score
Popularity
Activity
Freshness
Access Advisory Services