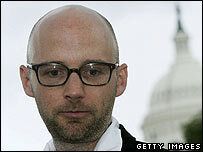 A computer program has been developed that supposedly increases a songwriter's chance of scoring a hit. The program, called Platinum Blue Music Intelligence, is already having an influence on what you're hearing. Several big record labels, including Sony BMG, are already using it, and some artists, including Moby, are advocating it.

According to the BBC, "It breaks songs down into 30 or so component parts including rhythm, melody, harmony, beat, cadence, timbre, pitch, and gives each a number.

"What they have found is just about all hit songs, no matter what genre, fit the same pattern. Match that pattern and then promote the song right, and you have an 80% chance of success."

The system's creators insist it will not stifle innovation or dehumanize the music.

Mike McCready, CEO of Platinum Blue, says: "If you look at the music that has been invented since Beethoven, all of the hit songs in every new genre conform to the same mathematical patterns.

"Reticent artists need to understand this is just a tool to help them get their art to a mass audience, rather than affect the art they're making."

But some artists are unimpressed. "I don't like the idea that this is influencing record companies in choosing songs," said Amanda Ghost, co-writer for chart-topping singer James Blunt.

"It's just making everything the same. The biggest problem today, in music, is it's too much of a marketing industry and not enough of a music industry."
4.2
Score
Popularity
Activity
Freshness
Access Advisory Services