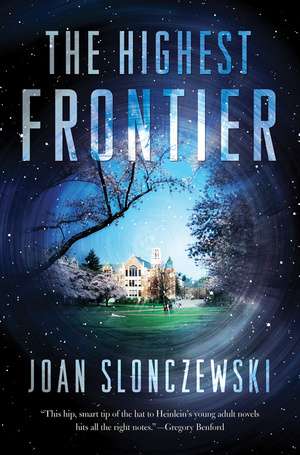 Omar Yusuf — September 21, 2011 — Tech
References: biology.kenyon.edu & io9
Share on Facebook Share on Twitter Share on LinkedIn Share on Pinterest
Joan Slonczewski's newest novel, The Highest Frontier, imagines a near-future wherein human beings occupy orbital space colonies, complete with breathable air and living eco-systems. If that idea seems too 'far out' for you, the Highest Frontier app -- launched in unison with the book -- should give you a more relatable image of what life could be like in outer space.

Slonczewski's newest novel takes place on a 4km-long rotating cylindrical colony -- rotating, in order to provide artificial gravity -- that was built as safe refuge from the tumultuous, eco-hazard that Earth has become. Similarly, the Highest Frontier app allows users to navigate the fictitious colony and get a more detailed sense of the characters are their unique perspective.

Replace the all-too-familiar skyline with an artificial energy core rotating on the horizon and you'll get an idea of the book's setting. That or simply download the app!
2
Score
Popularity
Activity
Freshness
Attend Future Festival Virtual