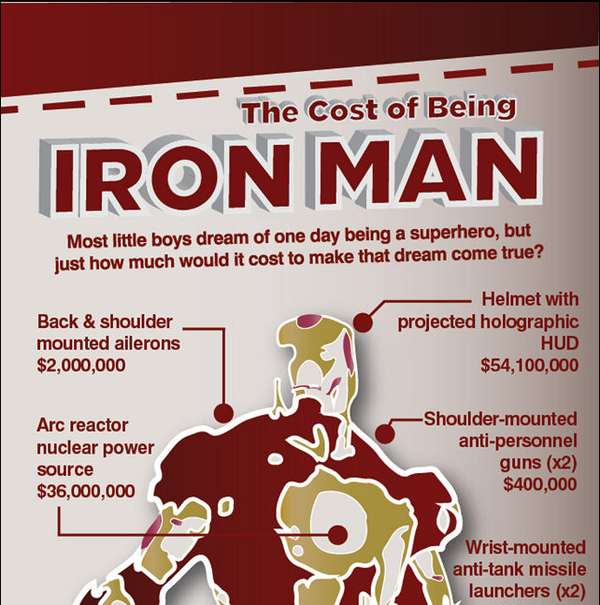 Erin Kirkpatrick — July 30, 2012 — Pop Culture
References: moneysupermarket & geekologie
For those who have ever wondered what kind of price tag superheroes rack up, The Cost of Being Iron Man Infographics reduces one crime fighter down to his cost. This infographic examines the financial commitment that playboy Mr. Tony Stark incurs, as a result of his brave and impulsive superhero ways.

Ironman is often regarded as one of the richest superheroes of all time, due to his father's involvement in the production of weapons. As a superhero who was not blessed with superpowers, Stark uses his wealth to buy technology and gadgets that ultimately become his superpowers.

According to this visualization, it allegedly would cost an exorbitant $1,612,717,000 to assume his heroic role as Ironman -- well over budget for many. Despite the immense detail put into this cost-calculating graphics, it still doesn't take into account every expense in Ironman's life -- vacations, everyday clothing and lavish dinners.

With an estimated $9.3 billion to his name and $20.3 billion to Stark Industries, Ironman has the disposable income and financial freedom to assume the role of playboy turned crime-fighting vigilante. If you're looking to invest in a career similar to Ironman, peruse The Cost of Being Iron Man Infographic, so you'll know what kind of loan you should take out.
6.7
Score
Popularity
Activity
Freshness