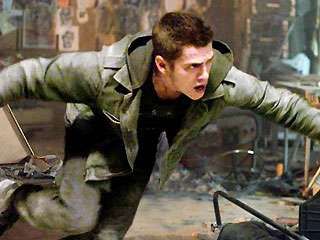 IdeaMan — February 16, 2008 — Tech
References: foxnews
Share on Facebook Share on Twitter Share on LinkedIn Share on Pinterest
Believe it or not, teleportation is actually possible! However, it doesn't involve physically moving an object (or in the movie, a person) from one place to another. It really involves transferring extremely detailed information about the teleportee, down to the quantum state of each of it's atoms, to another location where it can be recreated. Foxnews.com describes the basic process:

"Teleporting, say, an electron would first involve "entangling" a pair of electrons.

After the particles are made to interact in a certain manner, whatever one does influences the other, regardless of the distance between them â€” a bit of quantum physics that Einstein called "spooky action at a distance."

Next, one electron â€” the one you want teleported â€” would stay wherever you like while you would physically bring the other electron to whatever destination you wish.

Then you have to measure the quantum state of the electron you want teleported and send that in a signal to your destination, where it can be used on the other electron to recreate the first one.

Obviously, teleporting an electron is not the same as teleporting a person. Because of the huge number of sub-atomic particles the make up the human body, the above method may not ever be practical. Maybe that's why the technology used in "Jumper" and other science fiction series like Stargate SG-1 and Stargate Atlantis involves establishing a "wormhole", which is a sort of a tunnel between two places in space-time. Currently, we don't know how to do that either though, so you'll just have to travel the old-fashioned way for now.