Anti-Rape Device to Hit the Market 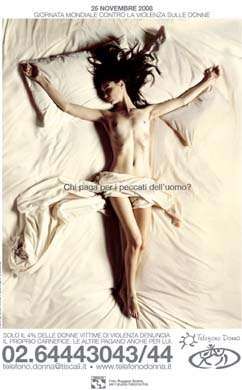 Tinkalicious — November 17, 2008 — Social Good
References: telegraph & current
Share on Facebook Share on Twitter Share on LinkedIn Share on Pinterest
This poster which was designed for Italy’s rape crisis helpline, Telefono Donna, to bring attention to International Day for the Elimination of Violence against Women (November 25), which it certainly has done. However, much of that attention is of the unwelcome kind.

The image has been criticized and condemned as sacrilegious by Milan’s conservative politicians, where the poster is planned to be posted at 500 locations throughout the northern industrial city.

“I’ll do everything in my power to stop this poster going up,” said city councilor Maurizio Cadeo.

After condemning the poster as “blasphemous” critics felt it would offend the religious beliefs of many Italians.

“We’re calling for the poster to be withdrawn because an important day like this should not be debased by such a sexual provocation,” said councilor Carlo Fidanza, a member of the right-wing National Alliance.”

Telefono Donna rape helpline President, Stefania Bartochetti, was surprised as there had been no objections raised in other Italian cities.

“As a Catholic I can’t see anything offensive or blasphemous. We chose a strong image to encourage more rape victims to break their silence,” she said.

‘Who Pays For Man’s Sins?’ asks the text on the poster together with a caption which reads 'Only four per cent of women who suffer sexual violence report their assailants.'