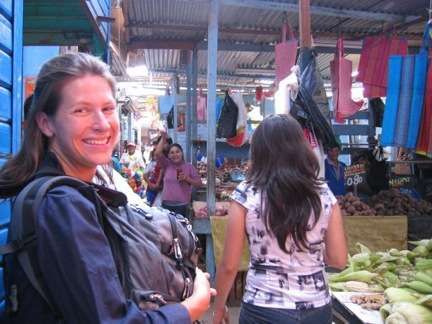 Tiana Reid — July 20, 2011 — Social Good
References: fincacanada.org
Share on Facebook Share on Twitter Share on LinkedIn Share on Pinterest
FINCA is a global microfinance organization that operates in less-industrialized countries around the world. In May, SocialBusiness.org featured FINCA’s poverty-focused community and economic development programs which aim to empower its clients, and now, we got the opportunity to interview Stéphanie Émond, the Development Manager at FINCA Canada. She spoke to us a bit about John Hatch’s road to founding FINCA and the creation of what he calls “Village Banking,” as well as how she herself came to work in microfinance and for FINCA.

Poverty is the greatest social challenge of our time. According to the World Bank, an estimated 2.6 billion people live on less than $2 a day -- the majority of them, women. Poverty is not a tangible problem that can be defined by one variable; it is many things, such as food insecurity, lack of adequate shelter, poor health care and limited access to educational opportunities. FINCA has the conviction that the poor can lift themselves out of poverty if given opportunities to improve their lives through access to credit and other financial services, and that those individuals are critical to the development of their communities and their countries. From a budding program in Latin America in 1984, FINCA now operates microfinance institutions in 21 countries around the world, reaching over 815,000 low-income entrepreneurs with small loans and other financial services.

In 1984, while working in a USAID project with farmers in Bolivia, John Hatch conceived a small loan program for low-income farmers that put them in charge. The program allowed them to obtain loans without collateral -- their main obstacle to accessing credit -- at interest rates they could afford. It brought groups of neighbors together, giving them the power to collectively disburse, invest and collect loan capital as they saw fit. His program became known as “Village Banking.” Four weeks after its launch, the program served some 14,000 families with loans worth $630,000, demonstrating a tremendous demand for working capital among the rural poor. Encouraged by the results, Hatch began training others in the Village Banking methodology, and new programs began to take root throughout Latin America.

Hatch founded FINCA in 1985. But not until 1986 did Village Banking find its historical focus. That year, Hatch started a small program in El Salvador to provide credit to low-income women involved in commerce and petty trade, or “microenterprise.” This focus was extremely successful in improving family welfare; the women’s businesses began to thrive after only one or two loans, their income grew, they posted exemplary repayment rates, and, above all, their children ate better. John Hatch was convinced that he had found an important tool to enable families to lift themselves out of poverty.

There were additional benefits. Because the women came together to borrow capital, they began to support one another -- and each other’s businesses. If one local microenterprise grew and attracted more customers, it benefited all the tiny businesses in the neighborhood. Village Banks became focal points for grassroots community development.

I started my career working as a marketing professional in the advertising industry in Toronto. After 5 years of successfully escalading echelons, I held a director-level position within a fast-growing enterprise, which many of my friends and peers looked at enviously. However, I felt uneasy. While our company was creating great jobs in Canada -- and great creativity -- I felt something was missing. I just couldn't turn off the feeling that my work was not contributing to *the greater good* of this world. I needed to find a way to apply my experience and skillset to the benefit of the billion women and men who struggled to survive on less than $2 per day. But how? I had never worked in that sector, I knew nothing about international development projects that relate to health, education, water sanitation etc.... And that's when I heard about the concept of microfinance -- providing small loans and other financial services -- to low-income entrepreneurs so they can build and grow their business and increase their incomes. I immediately felt that that was a field that I could relate to! But finding a job in the sector was certainly not easy for someone with no experience in microfinance let alone in working in a developing country....

After about one year of researching, I was able to land a short-term volunteer placement within a Peruvian microfinance institution that needed support to develop some of their marketing material. I quit my job, sold my car, sublet my apartment and emptied my savings account and left for Peru for an undetermined amount of time.... and it worked out great. After the volunteer placement, they decided to keep me on as an employee to work in their communications department. Working closely with our clients confirmed my passion for the field. I later came back to Canada, to first work for the Canadian International Development Agency (CIDA) and am now working with FINCA, an international microfinance organization that serves more than 815,000 poor clients in 21 developing countries.

From our clients. These women and men work immensely hard to build and grow their enterprises to improve their and their families' livelihoods. They are ingenious, creative and tenacious, even in the most difficult circumstances. Every time I feel discouraged or tired, I just think back at all those individuals I've met over the years, who have much less than me, and it just gives me the kick I need to continue!
3.9
Score
Popularity
Activity
Freshness
Get Better and Faster