Giving 2.0
Next
Set of
Related
Ideas 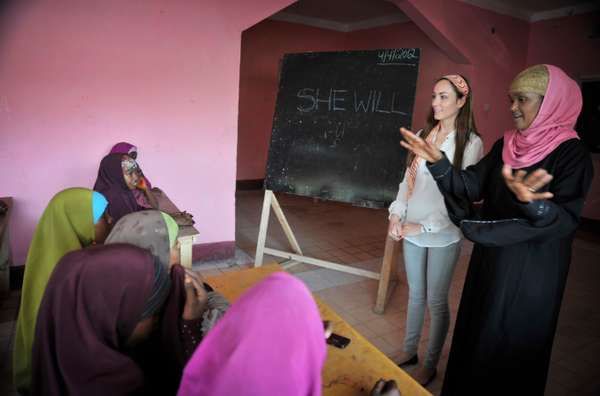 SHE WILL is a Project of the Acclaimed Global Enrichment Foundation

Tiana Reid — June 28, 2012 — Social Good
References: globalenrichmentfoundation
Share on Facebook Share on Twitter Share on LinkedIn Share on Pinterest
SHE WILL is a program of former journalist Amanda Lindhout’s Global Enrichment Foundation (GEF), of which she is the Founder and Executive Director. GEF puts emphasis on women in Somalia in order to offer a breadth of services for survivors of gender-based violence and sexual abuse including basic literacy, numeracy, medical support, therapy, sports programs like basketball, vocational training, small business grants and micro loans. Increasingly, non-profit organizations like SHE WILL are incorporating business opportunities into their model, all the while stretching the status quo notion of social enterprise in some respects.

“Amongst other human rights abuses, sexual violence against women and girls by parties to conflict has been on the rise, and the vulnerability of women to rape and other assault has been greatly increased by famine, displacement, widowhood and destitution,” GEF explains on its website. “Females have become extremely vulnerable to abduction, rape and forced marriage to insurgent fighters; these same girls are often rejected once pregnant, and have to return to a community where they are ostracized and stigmatized for their experience.”

SHE WILL works alongside a female Somali activist named Fartuun Aden and is currently building the country’s only safe house called Amiin House, which means “answer to prayer” and will be located in Mogadishu.

Lindhout started GEF in 2010 after she spent 460 days as a hostage in Somalia where she was working prior to the abduction. Since then, she’s helped to deliver education and aid to over 300,000 people by fundraising millions of dollars in order to support famine relief in Somalia. And for this, she was recognized by Bill Clinton, and was given the opportunity to present at the Clinton Global Initiative earlier this year.

In addition to SHE WILL, other GEF programs include Community Empowerment, which focuses on culturally specific initiatives to foster leadership and empowerment, and the Somali Women’s Scholarship Program, which gives women in Somalia financial means to go to university.

Undeniably, gender equity is at the core of GEF and it follows alongside a number of NGOs and social businesses alike that are taking a gender lens in order to create more sustainable positive social change.