Testing 52 Jobs in a Year 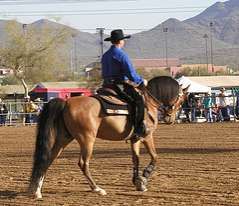 Instead of getting bogged down, Sean Aiken took this time to dabble with all sorts of different options, and do so publicly. He's posting on a blog he's titled, One Week Job which details his lifestyle experiments through different fields.

"Like many others in my generation, I can't tell you what I want to do with my life," Aiken explains on his blog. "Help me figure it out by offering me a 'One Week Job.'

"I am traveling anywhere in the world working 52 jobs in 52 weeks. All my wages are donated to charity."

Every week for a year he'll be trying something different, job shadowing people willing to show them their way of life and why they feel passionate about it.

What a fantastic way to find passion, dabble in careers and travel the world!

This week, for example he's trying the life of a Cowboy on a range in Wyoming.

"I have no idea what to expect," he wrote in his post. "When I think of a Cowboy, a cliche of images come to mind. The infamous Cowboy hat, boots, jacket, horse, piece of hay in the mouth, accent, riding in open fields for miles and miles.

"But all stereotypes aside, what exactly is it that a Cowboy does? Is it possible to be employed as a full-time Cowboy?"

Some of the other jobs he's tried include being a Firefighter in Florida, a Park Ranger at Hawaii Volcanoes National Park, an Astronomer in Hawaii, a Stock Trader in Fort Lauderdale, Florida, a Pre-School Teacher in Idaho, he was a motivational speaker and a Hollywood producer among many other things.
2.1
Score
Popularity
Activity
Freshness
Attend Future Festival