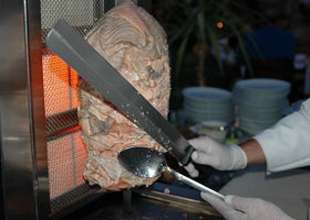 Showcased recently at a Fabex Food & Drinks Trade Fair in Antalya, Turkey, the salmon kebabs were dished out to the hungry and the curious attendees. 60 kilos of the kebab went in the first day!

The salmon kebab is currently, only available in a few exclusive dining and hotel establishments in Antalya, though Alarko Leroy, the enterprising company behind the new product launch, have committed to spreading the 'healthy' fast-food further afield. The supply will initially look to take hold in Turkey, where an estimated 5 tonnes will be consumed in 2008, followed by expansion in Europe and North America.

Taking the fast food image upmarket, the salmon kebab is made using prime imported salmon from Norway. The quality fish are filleted and infused with special combination of milk, cinnamon, bay leaves, and lemon to add a touch of the Mediterranean to it. Roasted on the horizontal skewer, it is slighted browned and then sliced into the awaiting pita bread, and into the hands of a lucky customer.
2.6
Score
Popularity
Activity
Freshness
View Innovation Webinars