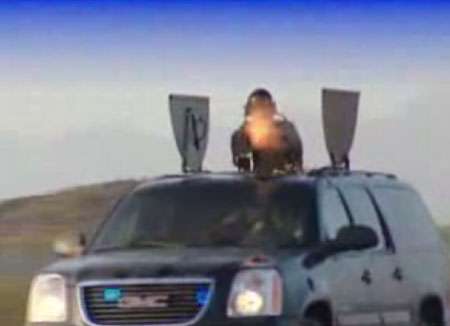 How many times have you raced down the freeway in a rush, late as hell, and suddenly traffic comes to a complete stop because some dumbass ran into another dumbass? This happens to me daily, it's called my commute to work. While sitting there, thoughts of violence generally enter my mind. I often come up with all sorts of elaborate vehicles or devices for my vehicle that could simply eliminate every car in my path.

Apparently the folks at Dillon Aero have been having the same thoughts (well probably not). The vehicle looks like a regular SUV, except it has a mounted gun turret where the back seat would be. The gun turret pops up through the roof and the hatch provides side protection for the gunner. The gunner can swivel 360 degrees, so no one is safe. Watch the video to see this baby in action, the shell casings pouring down over the vehicle as it's firing is awesome. Definitely my new dream vehicle!