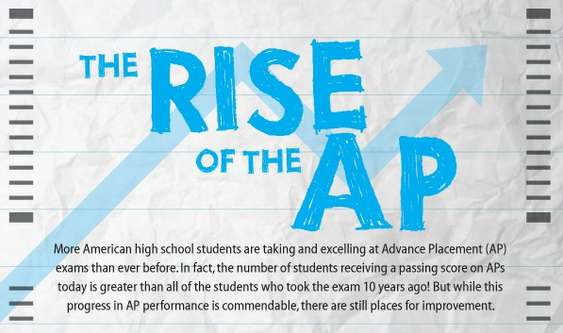 The 'Rise of the AP' is Smarter Than Ever

Jennifer Gosnell — May 29, 2012 — Social Good
References: teach & infographicsite
Share on Facebook Share on Twitter Share on LinkedIn Share on Pinterest
When advanced placement courses can mean the difference between college and university, the 'Rise of the AP' infograph is an important tool for American students. Although, as the graph indicates, whether or not the AP is important isn't in question, it's how students are faring from it.

Since 2001, the number of AP scorers recieving over a three (on a scale of one to five) in AP classes has dropped nearly 10%. The scale of who takes the exams is also disproportionate, with 66% of female takers in comparison to only 34% males. The ethnic divide is also taken into account. With Asian-Americans and White Graduates receiving the bulk of the highest marks, the system is facing some challenges to overcome.