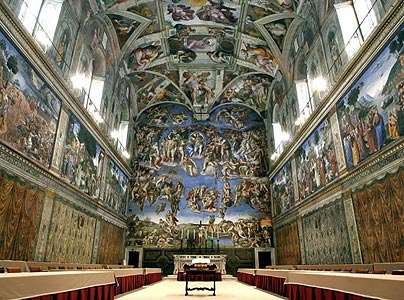 Are There Secret Codes in the Sistine Chapel?

lourdes sanchez bayas — June 22, 2008 — Business
References: telegraph
Share on Facebook Share on Twitter Share on LinkedIn Share on Pinterest
There is a book out that claims Michelangelo hid all kinds of secret codes when he painted the Sistine Chapel from 1508 to 1512. According to The Sistine Secrets: Unlocking the Codes in Michelangelo's Defiant Masterpiece written by Rabbi Benjamin Blech, an associate professor of Talmud at Yeshiva University in New York, and Roy Doliner a writer based in Rome who gives tours of the city and the Vatican, the ceiling of the renaissance masterpiece is actually a tale of subversive frescoes.

These frescoes insult Pope Julius II who commissioned the work and are riddled with Jewish mystical symbolism that serve as a bridge between the Catholic faith and Judaism through a bond of â€œlost mystical message of universal loveâ€.

The book, which is already on the New York Times bestseller list, further asserts that the key to this reading is found by unraveling the secret messages placed in the paintings by the artist â€œin the hope that eventually there would be those who would crack his codeâ€.

Scanning through the multitude of frescoes on the vast ceiling, the authors have found shapes that correspond to Hebrew letters. For example they say that the figure of David in the painting showing his battle with Goliath is in the shape of the Hebrew letter gimel, which in the mystical Jewish tradition known as Kabbalah symbolizes g'vurah, or strength.

This is hardly a new phenomenon. There are all kinds of theories and hypothesis out there about Michelangelo hiding subliminal messages in the Sistine Chapel and the Dan Brown mega hit book The Da Vinci Code may have spurred the craze. The difference here is that the authors are not mere crackpot theorists but respected scholars.

I'm a sucker for this kind of stuff so I will be checking out the book next time I swing by Barnes and Nobles.
3.9
Score
Popularity
Activity
Freshness
Attend Future Festival Virtual