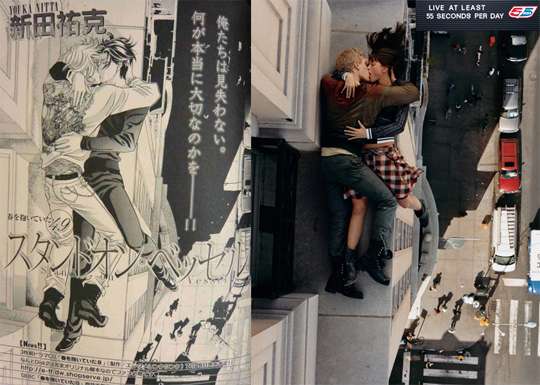 Based on her illustration in â€œStand Vesselâ€ manga series, Youka Nitta is obviously a big fan of the clothing brand.  Nitta admitted to copying the 55DSL's infamous â€œKiss on the Ledgeâ€ to come up with her own black and white anime version.

While copying is clearly a violation of intellectual rights for most of us, 55DSL surprisingly took Youka's imitation as a form of flattery.  The Diesel subsidiary lightheartedly accepted the artist's apology.

Instead of suing the artist, 55DSL released a statement in its website saying, â€œNitta, don't worry, we're not that kind of brand, we consider this a tribute, only the greatest are copied, right?â€
2.5
Score
Popularity
Activity
Freshness
View Innovation Webinars

50 Illustration Innovations To Celebrate The 80th Birthday of Mickey Mouse