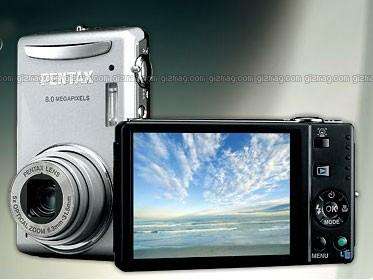 Bianca — May 23, 2008 — Tech
References: gizmag
Share on Facebook Share on Twitter Share on LinkedIn Share on Pinterest
If you're going to shell out $300 for a digital camera, these days you expect something pretty snazzy. The new Pentax Optio V20 is charging just that price, and they're getting away with it because they're catering to a desperate niche -- the blinkers.

If you're not one yourself, chances are, you know someone who is. They're the people who always seem to have their eyes shut in photos, and no one looks good like that -- even the most beautiful people look ugly, and the most intelligent people stupid.

To these people, the $300 is more than a fair price to pay for more flattering shots.

"The new Optio V20 has a full house of digital alchemy application functions such as the 'Smile Capture' function that determines smiles and photographs them automatically and the 'Blinking Detection' function where the camera tells the user whether the people blinked when the photo was taken," Gizmag says.

The 8-megapixel camera also features 'Digital Shake Reduction,' so you want have to worry that your nerves will ruin the photos you take during the awkward stages of a new relationship. The technology also helps you capture things moving by quickly too, so it's great if you want to capture images of sports games. It would be ideal for grandparents who like going to their grandchildrens' sports games.

It has a 5x optical lens zoom and a 3" LCD monitor that offers a 170 degree angle so you can see the image sharply even if you're holding it to the side or looking at it from an upward stretched arm.