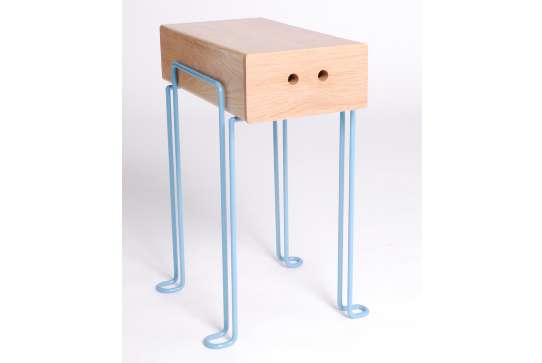 The 'Our Kid' Side Table Will Charm You Increasing its Lifespan

Amelia Roblin — February 7, 2013 — Eco
References: behance.net & furnitureserved
It's difficult to form an emotional connection to contemporary furnishings, given that most modern people have no idea who produced their pieces -- if they weren't, more likely, made by machines. The 'Our Kid' Side Table is one designer's attempt to appeal to the owner sentimentally, even though it wasn't crafted by someone's uncle and it hasn't been meticulously treated to marvelous elaborate details.

Daniel Schofield has, however, put a great deal of care into the creation of this quirky piece of furniture. A lovely box was assembled from beautiful pale wood to produce the tabletop and a built-in drawer. A wireframe stand was bent into the endearing forms of four slender legs with feet. A pair of eye-like holes, instead of a handle, make the 'Our Kid' Side Table look vaguely animated, discouraging the consumer from casting the object aside when styles and tastes change.
3.1
Score
Popularity
Activity
Freshness