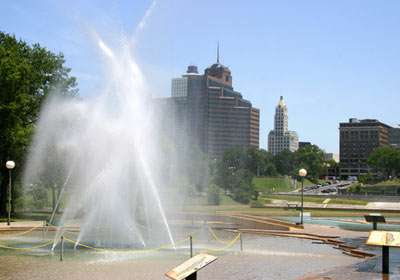 The 16 Fattest Cities in America

Bianca — November 16, 2007 — Lifestyle
References: forbes
Share on Facebook Share on Twitter Share on LinkedIn Share on Pinterest
It's no secret America is battling an obesity epidemic, but reports are usually pretty generalized. Fried chicken in the south, McDonalds on every major street, and donuts at every truck stop along the way don't so much help the one third of obese Americans battle their bulges.

Forbes magazine compiled a list of the American cities with the highest rates of obesity. I'm not talking about being overweight; these percentages indicate the number of people diagnosed with clinical obesity in the following areas:

Surprised? What's important to note is that this illness doesn't just strike a certain sector of society; from the poorest of the poor, to the most affluent VIPs, obesity can hit anyone, regardless of their location, be they big city urbanites, living in cookie cutter suburbs on living on a rural farm.
2.7
Score
Popularity
Activity
Freshness
View Innovation Webinars

42 Weightastic Innovations
A Societal View on the Body, From Cars to Presidents