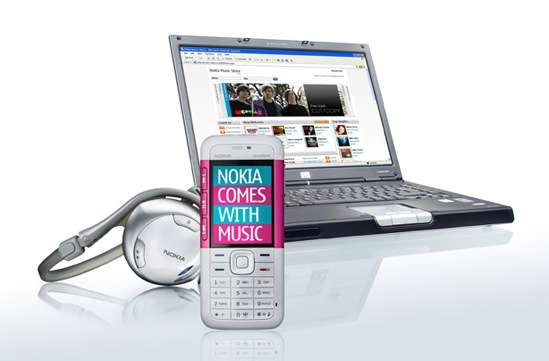 Rich — September 2, 2008 — Business
References: guardian & theverychronicles.blogspot
Share on Facebook Share on Twitter Share on LinkedIn Share on Pinterest
Nokia is aiming to take on the growing influence of the Apple iPhone by launching a new series of handsets that enable owners to download an unlimited number of music tracks. Users can peruse Nokia’s library of over 2 million tracks and download tunes to their computers. The cost of the service is built into the price of the phone, which is estimated to be around €300.

The service expires after one year, requiring customers to purchase a new “Comes With Music” device, but the old handset will continue to work for normal phone use, and previously downloaded tracks can still be listened to.

Packaging free music with another product or service is proving to be an interesting future model for the sale of music. To battle illegal music downloads, a possible solution is to provide better service than the free music downloads offered on illegal P2P networks.

Nokia’s music service uses Microsofts Digital Rights Management and means that music downloaded from Nokia can’t be used on an iPod or the iPhone. Their policy of forcing people to buy a new handset each year, rather than offering customers the chance to pay for a new subscription, ensures the sale of more Nokia handsets to combat the increasing influence of the iPhone.

But such a strategy goes against why the iPod and iPhone are such great success stories. If you remove barriers and make things easier for the user, you will be far more successful.

Offering a better, and open, service, where the revenue comes from actually selling music seems to be a better approach that using free music as a purchasing incentive for new handset sales. In this environmentally sensitive time, and with a global recession looming, encouraging young kids to throw away technology after one year seems a little excessive.

Either way, expect to see lots more ‘Comes With Free Music’ bundled with everything, as the music industry seeks to revive itself.
3.6
Score
Popularity
Activity
Freshness
Get Better and Faster