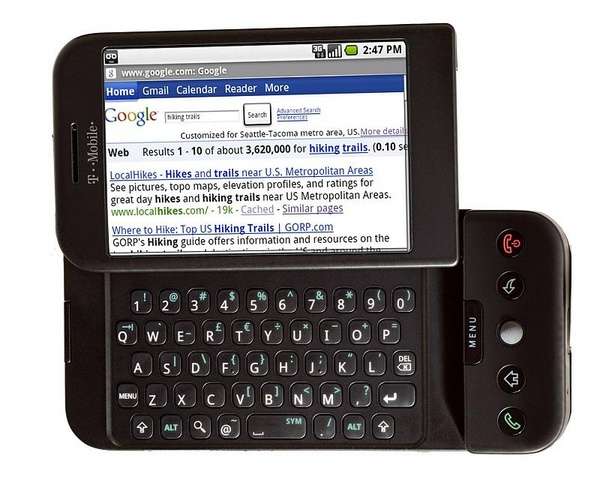 Rich — September 23, 2008 — Tech
References: T-MobileG1 & gizmodo
Share on Facebook Share on Twitter Share on LinkedIn Share on Pinterest
Finally the most anticipated phone since last year’s launch of the iPhone, the G1 has been launched in NY. The phone has been co-developed by Google, HTC and T-Mobile, with the intention of developing a product that delivers the best mobile internet experience. The phone is a little larger that the Apple iPhone, it’s biggest competitor, but does include a slide out QWERTY keyboard in addition to a touchscreen, unlike the iPhone.

It includes camera, Wi-Fi, 3G and GPS. The phone is closely tied to Google’s suit of online software and comes with ‘push’ gmail. Without support for exchange, however, the phone is clearly aimed initially at the private home user.

The web browsing experience is described as rich, but first reactions say the interface is very dated. While it does not come with many applications, the developer community will be able to rectify at least the last point as it runs on Google’s open source Android mobile operating system meaning that anyone can develop applications for the phone and theoretically improve the phone’s functionality. Not to miss out on music, while not compatible with iTunes (though being open source, maybe Apple could rectify that), the phone is paired with Amazong, a mobile music service from Amazon.

Without a doubt the coolest thing on the G1 is the Google Maps integration that is more sophisticated than on the iPhone. Taking advantage of the accelerometer and GPS functionality, the user can navigate Google’s street map views for their exact location simply by moving the phone. Point the phone at a building, and the phone will display an image of that building, with additional useful information superimposed over the top (one can imagine the location based ads that Google will soon be serving up!). Watch this video and you will get what I mean. There is also an official video tour from HTC included in this article.

The G1 is available exclusively on T-Mobile and will only be available on a special data plan costing $35 for unlimited web and messaging. Other handset providers are expected to release their ‘Google’ phones soon. Available for a subsidized price of $179, it will be available in the USA from October and UK in November, with the rest of Europe following in the first quarter of 2009.

The phone at launch may not be quite as sexy as the iPhone, but the intention is to keep on developing the applications and experience. Only time will tell which approach will work out best. The open approach of Google, or the walled garden of Apple.
3.9
Score
Popularity
Activity
Freshness
Attend Future Festival Virtual