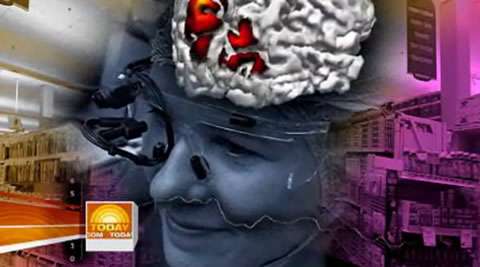 Rainer Takahashi — March 31, 2009 — Business
References: neurosciencemarketing & martinlindstrom
Share on Facebook Share on Twitter Share on LinkedIn Share on Pinterest
From the beginning of capitalism, companies have been trying to get into the heads of consumers in order to optimally produce and market their products. Statistical analysis, expensive consultants and focus groups were, and still are, commonly used to reach this objective.

Recently, though, a new method of market/consumer research has become widely available: Neuro-Marketing. Neuro-Marketing involves hooking humans up to an fMRI or Functional Magnetic Resonance Imaging scanner, which measures the magnetic properties of hemoglobin (the component in red blood cells that carry oxygen) in their brains.

While the candidate is attached to this machine, researcher can show them pictures, ask them questions, or have them simply listen to music or verbal statements. All the while, the fMRI machine’s output shows what the candidate is feeling or subconsciously thinking; sad, happy, excited, craving something, focused, aroused, and so on.

In turn, this information can be used to prove or disprove whether certain marketing tactics will work or not (before millions are spent).

Martin Lindstrom, the author of “Buyology” and the one who headed the original research into fMRI studies, shows the effectiveness of certain marketing and advertising tactics commonly known to the general public.

The one example Lindstrom touches on is based on the warning labels and pictures found on cigarette cartons. Many countries, including Canada, require cigarette companies to print gruesome pictures and warnings on the ill effects of cigarettes on all their packages.

Up front, it may seem that this is a great tactic to discourage smoking, but after the fMRI study, Lindstrom disagrees. In fact, the study he conducted involving smokers showed that these warnings actually cause smokers to crave a cigarette more than discourage it. The fMRI found that the craving area of the brain actually lit up when candidates were shown pictures of these warnings.

Another one of Lindstrom’s studies reviewed the actual effects that sex has in advertisements. Without getting to far into the study, Lindstrom disproved the common notion that sex sells. In fact, Lindstrom went on to show that the audience could remember the sexual part of the advertisement, but many could not remember what the brand or advertisement was for. Simply put, the sexual content is too distracting.

A further study analyzed the success of the iPod and its white headphones, and analyzed the subconscious part of the brain that makes popular products popular. It is even tempting to say that all those iPod TV commercials had little to do with Apple’s success.

So what does all this mean?  Activists state that this new Neuro-Marketing is similar to the subliminal advertising days of the 1950’s, where consumers can be tricked. Just like anything else, this new technology can be used for selfish purposes, which worries a lot of consumers and lawmakers alike.

For now, the best way consumers can be sure that they are not taken advantage of is to ask the following question before making any purchases: “What’s really making me buy this right now?” Some may be surprised at how often there is no clear answer to this simple question and how often they buy things without a real need.
3.3
Score
Popularity
Activity
Freshness
Jeremy Gutsche Keynote Speaker

The Brain Scan That Can Read Your Mind