What Is Too Short? 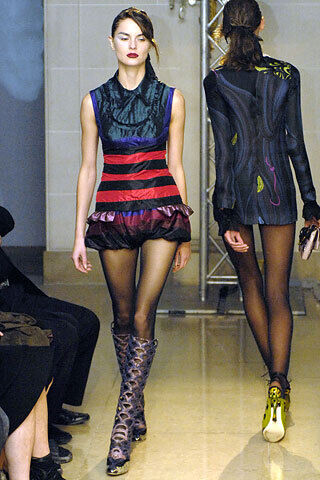 The Spring 2008 collection looked very much like the models had delved into the attic at mom's and picked out some of their cutest dresses from the days of elementary school.

Perhaps the look is doable for the masses though -- most of us don't have lengthy gazelle limbs. A woman of average height could look much more moderate in the baby-doll inspired gowns. Several outfits had that naughty French maid appeal to them, and looked more like adult Halloween costumes.

Another look being toyed with by several designers this season is the fingerless glove. Miu Miu took the look a step further, adding lampshade-like ankle coverings to some of the dresses, perhaps to take the edge off the micro-minis. For those not willing to toy with such an extreme look, the tiny ankle bows are a more wearable way to integrate accessories to the lower leg.

Special to Miu Miu are the detachable collars -- at least they look like detachables. Worn with dresses, button-on collars add a punch of something different, but worn in other ways, they can prove quite useful. These collars can add a touch of prep to sweaters without the bulk of actually wearing a blouse underneath. Miu Miu has a variation of different collars, and could be an affordable way to infuse your wardrobe with a splash of designer appeal.

Miu Miu is known for wilder looks, and that's clearly identified in this collection, particularly in the pieces reminiscent of harlequin dolls. Miuccia Prada even said her collection was inspired by thoughts of "life as theater, and all the clichÃ©s of how people represent themselves in the world."

The collection is a very ecclectic mix of so many styles of from the past. We see renaissance influences with the balloon trousers, there is a 40s appeal to the pale skin with scarlet pouts, and the 60s are the drive behind the babydolls and bug-eye shades.