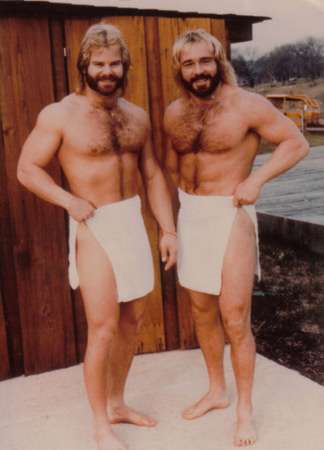 Jordan Sowunmi — July 1, 2011 — Lifestyle
References: theseamericans.org & lifelounge.au
As a lifelong professional wrestling fan, sometimes it’s hard to defend the business as a serious form of athletic entertainment to a non-fan, and this collection of retro Memphis Wrestling photographs does nothing to help the cause.

These Memphis Wrestling photographs are all taken from 1980s promotional shots used by wrestling legend Jerry Jarrett’s company. Professional wrestling in the city of Memphis is a long-lasting cultural institution, with the ratings of its Saturday morning programming routinely placing in the top five for local television programs, and often dwarfing ratings for professional wrestling in many other major markets.

In this collection of Memphis Wrestling photographs, we see shots of the Fabulous Ones, Stan Lane and Steve Keirn, heartthrob tag-team and one of the early templates for ‘pretty-boy’ tag-team wrestlers who would become the norm for professional wrestling for the rest of the 80s and the duration of the 90s.

The comedy in these Memphis Wrestling photographs is in how ridiculous the shots appear as representative of a sport that is supposed to be a ‘real’ athletic competition.  Take a look through the collection and take a trip down memory lane to view some of Tennessee’s most beloved entertainers.

Implications - One of the most effective ways a company can promote its products is by mining their company history for advertisements and photographs that show brand development and vintage cool. By inviting consumers to see the growth in a company, the brand does a good job of building an emotional connection between the product and consumers.
6.3
Score
Popularity
Activity
Freshness