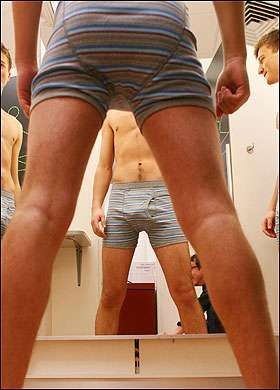 The push up underwear was invented by Croatian designer Roland Lodoli who sells them in his store in Zagreb. The boxer briefs have bands around the legs to push up a guy’s package. As the Sun describes, “The briefs have a special pocket inside that thrusts the contents up and out.”

Next up, push up swimwear. Wait, has this guy ever been swimming in cold water? Brings up a whole new topic: “Are you happy to see me, or it that your push up underwear?”

Playful Underwear Campaigns
Jumping and Dancing in Undies for Acne